A Battenkill Gallery exhibit of Norman Rockwell paintings will be on exhibit at the Sugar Shack on Rte. 7A, Sugar Shack Lane, in Arlington through December 20. Rockwell lived in Arlington and painted many of his most famous works there, often using local people as models. The column below was provided by the office of Sen. Bernie Sanders in “The Bernie Buzz.”

“As long as my fundamental purpose is to interpret the typical American, Arlington affords the ideal residence. From this calm vantage point, far from the cities with their crowds and clamor, I view things with detachment and serenity; also I can go about my task with a minimum of interruption and with the knowledge that right here are exactly the models needed for my purpose – the sincere, honest, homespun types that I love to paint. Now my pictures grew out of the world around me, the everyday life of my neighbors. I didn’t fake anymore.” – Norman Rockwell

“Norman Rockwell’s connection to his friends and neighbors in Arlington is an important reason why in addition to the scores of reproductions of the artist’s Saturday Evening Post covers, the exhibit includes photos and stories of the local townsfolk, who were models for his paintings, Richie Mears’ father among them.” – Rich Mears

“When Roosevelt and Churchill issued their Atlantic Charter with its Four Freedoms proclamation, I had tried to read it, thinking that maybe it contained the idea I was looking for as a way to contribute to the war effort. The language was so noble. I juggled the Four Freedoms around in my mind, trying to find a picture. I did a Post cover and an illustration, went to an Arlington Town Meeting, attended a Grange supper, struggling all the while with my idea, or rather the lack of it. Then one night as I was tossing in bed, I suddenly remembered how my next door neighbor, Jim Edgerton, had stood up at Town Meeting and said something everybody else disagreed with. But they let him have his say. No one had shouted him down. My God, I thought, that’s it! There it is. Freedom of Speech. I’ll illustrate the Four Freedoms using my Vermont neighbors as models. I’ll express these noble ideas in simple, everyday scenes that everybody can understand.” – Norman Rockwell

Memories of the Arlington Years

“In his pictures, Norman made our town of Arlington, Vermont a kind of model of the way life used to be – or should be – simple, easy going, with people without all the stress and strains that are part of life today. It is still a town where people stick together and do things for each other. One year I was very ill, and when I came home from the hospital I had a relapse. Norman’s wife Mary came in one morning, saw me, called the doctor and asked him if she could take me home to her place and take care of me there. So there I went, and she made sure the children were taken care of. Mary would come over and read the children to sleep.” – Clarice Squires

“My husband Walt was a carpenter. In 1943, he remodeled an old building for Norman’s new studio after the first one burned to the ground. Walt modeled in this picture as the blacksmith in the plaid shirt. Walt was one of the seated men in FREEDOM OF SPEECH, we both were called on to model for FREEDOM OF WORSHIP, and our children were in FREEDOM FROM FEAR. Norman would see something in someone the rest of us would never see. It was interesting to be with him because, all of a sudden, he’d see someone who was interesting to him, and it was as if he was composing a picture right there. I would always know when it was happening by the look in Norman’s eyes.” – Clarice Squires 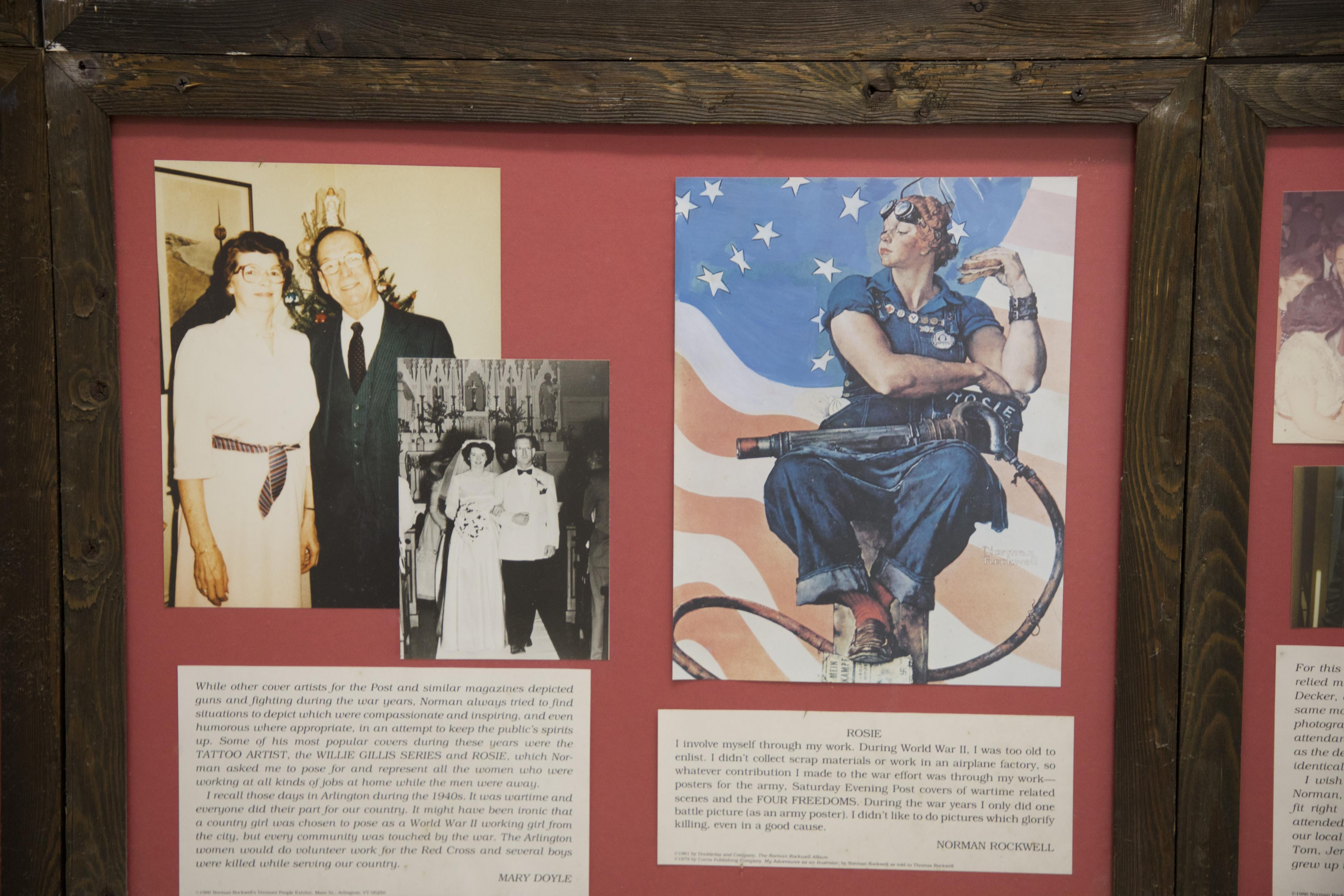 “While other cover artists for the Post and similar magazines depicted guns and fighting during the war years, Norman always tried to find situations to depict which were compassionate and inspiring, and even humorous where appropriate, in an attempt to keep the public’s spirits up. Some of his most popular covers during these years were the TATTOO ARTIST, the WILLIE GILLIS SERIES and ROSIE, which Norman asked me to pose for and represent all the women who were working at all kinds of jobs at home while the men were away.

“I recall those days in Arlington during the 1940s. It was wartime and everyone did their part for our country. It might have been ironic that a country girl was chosen to pose as a World War II working girl from the city, but every community was touched by the war. The Arlington women would do volunteer work for the Red Cross and several boys were killed while serving our country.” – Mary Doyle

“Although here Norman portrayed my dad, Clarence Decker, as a sailor who passed through many ports, he only traveled the New England states. Norman and his wife Mary joined the Battenkill Grange #487 in West Arlington, and Norman remained a member even after he moved to Stockbridge, Massachusetts. They thoroughly enjoyed participating fully in the various Grange activities, with Norman holding an official position… – Shirley Decker Matteson 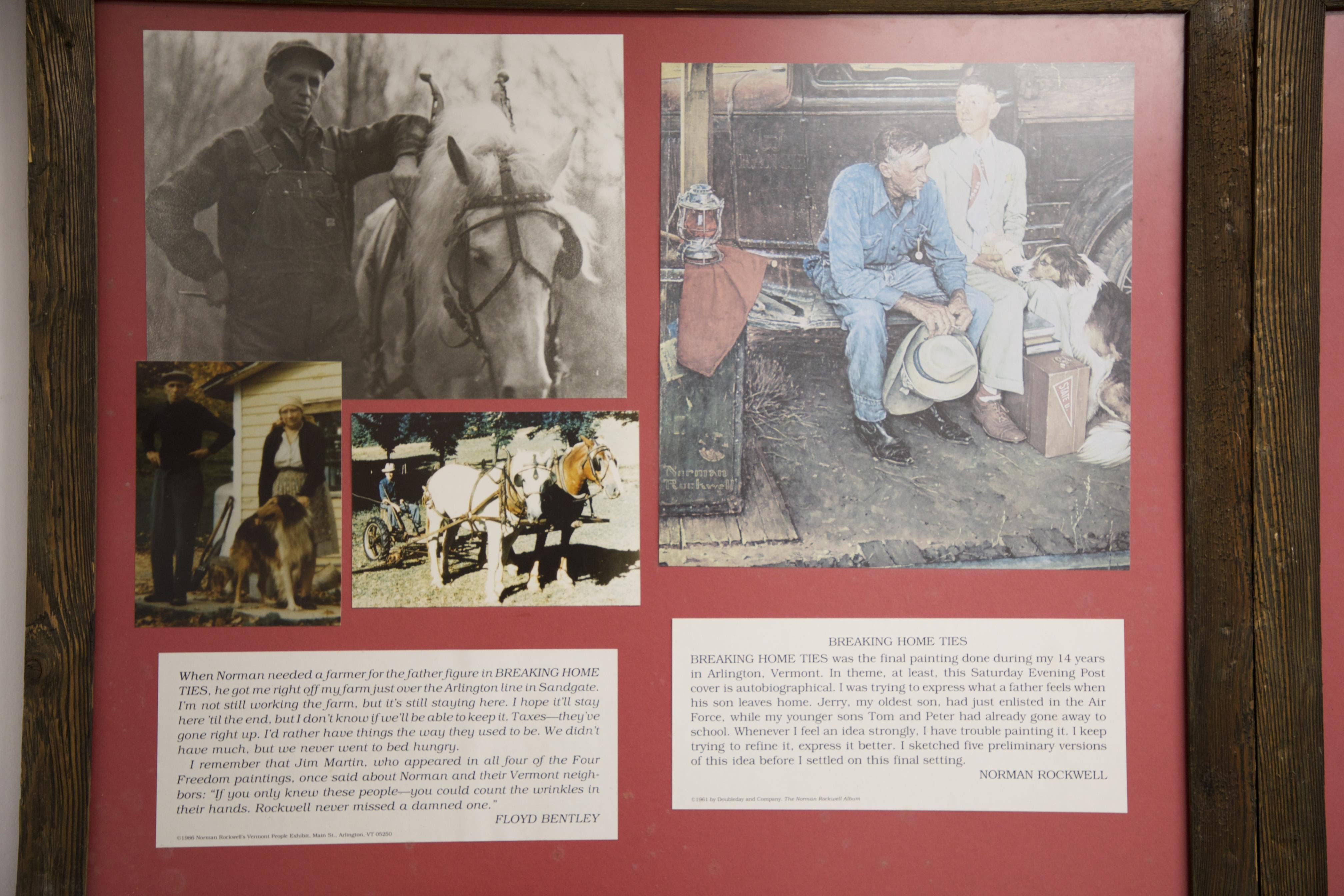 “When Norman needed a farmer for the father figure in BREAKING HOME TIES, he got me right off my farm just over the Arlington line in Sandgate. I’m not still working the farm, but it’s still staying here. I hope it’ll stay here ‘till the end, but I don’t know if we’ll be able to keep it. Taxes – they’ve gone right up. I’d rather have things the way they used to be. We didn’t have much, but we never went to bed hungry. I remember that Jim Martin, who appeared in all four of the Four Freedom paintings, once said about Norman and their Vermont neighbors: ‘If you only knew these people – you could count the wrinkles in their hands. Rockwell never missed a damned one.” – Floyd Bentley


“BREAKING HOME TIES was the final painting done during my 14 years in Arlington, Vermont. In theme, at least, this Saturday Evening Post cover is autobiographical. I was trying to express what a father feels when his son leaves home. Jerry, my oldest son, had just enlisted in the Air Force, while my younger sons Tom and Peter had already gone away to school. Whenever I feel an idea strongly, I have trouble painting it. I keep trying to refine it, express it better. I sketched five preliminary versions of this idea before I settled on this final setting.” – Norman Rockwell