See nova in the northern sky 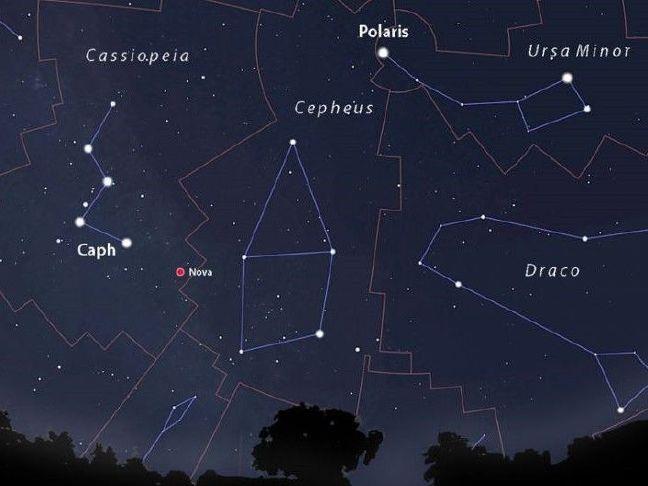 To see the nova: Look to the north. Follow the bottom two stars in the M- or W-shaped constellation Cassiopeia to find the nova. Credit: Star chart image by Bob King of Sky & Telescope.

A nova star should be visible this week in the clear night sky above Vermont and upstate New York’s North Country.

Designated Nova V1405 Cas by astronomers, the stellar nova was first observed two months ago. But now the star is bright enough to be visible to the naked eye.

However, don’t expect a dramatic showing; this object is not a supernova and appears as a typical, but brightish star from Earth.

To see the nova, viewers in Vermont and the North Country will need a dark-sky location, away from obscuring trees, buildings, automobile headlights, and outdoor security lights.

The object is located low on the northern horizon in the direction of the constellation Cassiopeia.

“Now that the nova is around magnitude 5.5,” writes Space.com science writer Kelly Kizer Whitt, “those with keen eyesight and dark skies can hunt it down without any optical aid at all, though it may help to first locate it with binoculars or a telescope and then your eyes alone.”

A nova explosion, unlike a supernova, is created when two stars get too close in a binary star system. In the case of Nova V1405 Cas, a companion white dwarf star is interfering with its parent star that is similar to our Sun.

While a nova does not destroy its host star a supernova does in spectacular fashion.

“Being so close, the more massive white dwarf siphons gas – mostly hydrogen – from its companion star,” according to Kizer Whitt. “An accretion disk forms around the white dwarf, which, in turn, deposits a hydrogen layer onto the surface of the white dwarf. This causes temperatures and pressures to build, finally creating a runaway thermonuclear reaction.”

“Novae are fun to watch,” writes Bob King of Star & Telescope magazine. “When we look at one in our telescopes we’re seeing the flash of light accompanying the blast — like watching a thermonuclear bomb going off but at a very safe distance.”

To see the nova locally: Refer to the attached star map. Follow the bottom two stars in the M- or W-shaped constellation Cassiopeia to find the nova. The chart shows the constellations as they looked in March, so remember that the positions have since changed.