Two days after Barre resident Brian Judd and a handful of volunteers raised a big American flag over Barre City Hall Park City Park on 9/11 without permission from the Progressive-led City Council, flag critic and Ward One Councilor Emel Cambel told the Barre Police Department ‘threats’ had been made against her in connection with the event.

However, documents and phone recordings produced by Barre police show the Progressive councilor’s claim is untrue. Cambel did receive a bevy of citizen complaints for calling the 30’ x20’ U.S. flag “intimidating,” among her other eye-raising statements, at a Sept. 7 City Council meeting.

Cambel was told by investigating officer Deputy Chief Larry Eastman none of the complaints were threatening. 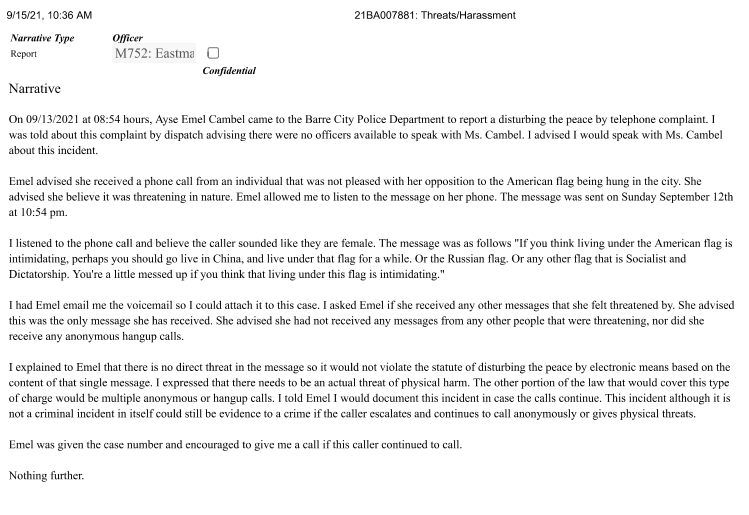 Here’s the audio file of the actual phone call:

After media exposure to her comments, Cambel also received several emails to her official city email address, which is published at the city website. Last names are withheld at Vermont Daily Chronicle discretion, because the emails were produced by BPD following a Freedom of Information Act public records request. Here’s a short note from Dennis:

Scott, a retired Army sergeant, took offense at her implied insult to those who have served in the military:

“I cannot believe your thought process on displaying the flag. I am appalled anyone needs to ask permission to fly the American flag that so many service members died for to give you the rights you have today. I am a combat veteran and you basically slapped me in the face. I hope you step down from your position. You are not worthy of it. I hope all the media jumps all over this situation.”

The following excerpts from a lengthy letter came from Rich, leader of a Barre civic group and self-described Democrat:

“I’m deeply troubled, bothered, hurt, frustrated, angered and disgusted…..Not being able to take the 20 year anniversary of 9/11 as a separate event and honor it by hanging a flag to show support for the nearly 3000 innocent victims of that day is honestly appalling. The flag was used as a unifying symbol on 9/11 and moving forward from it, people in this country rallied behind it and put aside any differences in color, race, gender and politics to show support and rally to those that were lost. I feel as though you are overlooking what the flag meant to so many people during that time.

“Also, Councilor Campbell, your use of the term “hostage” when describing how you felt is an absolute slap in the face to the three planes full of people who were literally held hostage and lost their lives because of the events of that day. I would hope in the days since you have had time to reflect on that term and will issue an apology to the families and loved ones who lost people from those plane crashes.”

Robert from South Burlington called Cambel out as a “coward” who is “unfit for public office,” in part because she fears the U.S. flag but insists Barre fly the Black Lives Matter pennant.

“I am writing to express my profound gratitude to Brian Judd for defying you and the other Barre city councilors who could not muster the civility to approve his more than reasonable request to raise our flag on September 11.  There comes a time when “government” becomes so corrupt that civil disobedience such as this is the only alternative.  To think one must disobey his government in order to raise the American flag is incomprehensible.  Shame on you and the other cowards whose silence spoke so loudly.

“If you are indeed intimidated by a large American flag, that may be well worth looking into.  I rue that people unfit for public office are the same people most keenly interested in occupying such offices.

“I note that you are a proponent of flying the Black Lives Matter flag.  To use your position to promote that flag while simultaneously denying a permit to fly the US flag is authoritarian, and unacceptable. I look forward to hearing of your resignation, or sound defeat in the next election.”

At least one writer resorted to crude language:

“You should be ashamed of yourself. Please resign and move out of the greatest country ever. Communist liberals is what made me leave Vermont. F–k off.”

“I’m a Barre resident since 1971. I have served our nation for 34 years. Your comments at the City Council meeting about our nation’s Flag and the denial of a 9/11…..are not worthy of dialogue or any discourse. You do need to resign from your position and  please leave our city alone. It’s a shame that people like you are in any position of leadership.”

There are a few more letters. All take Cambel to task for her statements and inaction, and none are threatening – unless what she considers ‘threatening’ are calls for her resignation or getting tossed out of office by the voters “threatening.”

Cambel was elected to her Ward One seat this March, replacing Republican John Steinmann, who chose not to run. She defeated Republican Timothy Boltin.